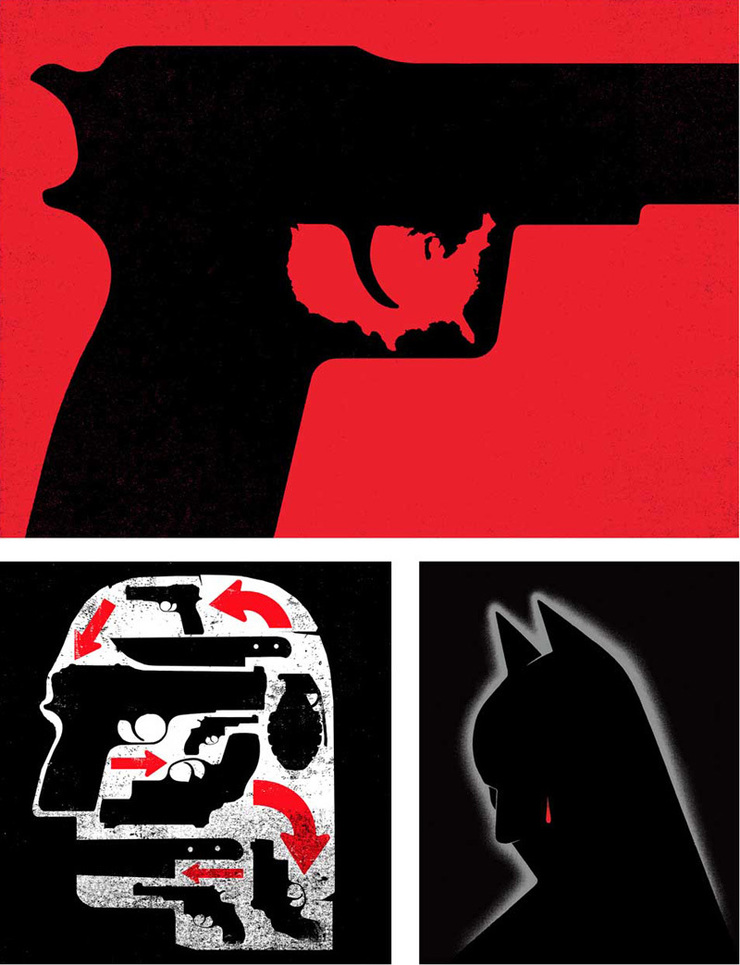 I was recently interviewed by Peggy Roalf of American Illustration.   The interview along with some images is on their website here: ai-ap.com or scroll down to read the transcript below.

Edel Rodriguez is an illustrator whose style can’t be pigeonholed—he reaches into a mental resource bin informed by revolution, consumerism, pop art and Modernism and in the process, creates something right on every try. But I must confess, his portrait of Chairman Mao for a 2005 TIME magazine cover is an image lodged in my brain. I recently asked Edel to take the DART Artist Q&A, and this is what he wrote:

As an artist, what are some of your favorite things about living and working in the suburbs of New Jersey?

I live in Morris County, New Jersey, near New York City. I’m originally from El Gabriel, Cuba, a small town in the countryside, south of Havana. I like living and working out here, it’s quiet, away from all the goings-on in the city. I like the space and living near woods, lakes, and mountains. I sometimes set up tables in the yard and work outdoors. Some of the things I come across on walks show up in my work. I’m close to Manhattan so I get a bit of both, the city and country life.

How and when did you first become interested in art, design and illustration?

I was always drawing as a kid. In Cuba it was mostly tanks, missiles and soldiers. I was fascinated by the pageantry of the Revolution. Later on, as a teenager in Miami, I was known as the art kid in school.  When teachers or a school club needed a poster or a cover for a yearbook or literary magazine, they’d ask me if I wanted to work on it. My high school art teacher occasionally gave me information about county or state poster contests. I created art for those and was fortunate to have my work selected for publication a number of times. I never heard the term “illustration” throughout my early life, I was just drawing and painting. I was pretty good at math and science so my plan was actually to become an architect.  I got an internship at an architecture firm my senior year of high school and figured out that maybe architecture wasn’t for me. I learned about the field of illustration when I was in college at Pratt Institute.

What was your first commercial assignment?

I had a friend in high school whose dad did a lot of promotional work in Miami. He asked me to paint a portrait of Roberto Duran, the boxer, for one of their events, where Duran was going to do a signing. I think I was about 16 or 17 and made 400 bucks from the assignment.  At the time, I was working as a janitor at a toy store after school and figured that I’d have to work about 100 hours at my job to earn that much. Painting was far more fun than mopping floors.

What is your favorite part of the creative process?

The moment when I’m painting and life’s concerns kind of disappear. I also enjoy stumbling on a new path or direction. Not knowing what’s going to happen next is exhilarating.

Do you keep a sketchbook? What is the balance between art you create on paper versus In the computer?

I keep sketchbooks on my travels sometimes. I like taking the time to sit and learn from the place I’m visiting. The light, people, and landscape of various countries can vary so much. I learn more about those places and the artists that worked there from drawing than I do from taking photographs. I also keep several small sketchbooks where I jot down quick ideas. They’re more like notebooks, a place where I can go to when I start working on larger work. I don’t keep a regular sketchbook around the studio as I tend to go right into making final work.

What are you reading?

Mumbai New York Scranton, a memoir by friend and illustrator Tamara Shopsin, along with some other memoirs.  Also, Gerhard Richter’s Daily Practice of Painting, a book of his writings.

Who and what are some of your strongest influences?

Many of the 20th century artists—Picasso, Matisse, Paul Klee, Frida Kahlo, Kiki Smith, David Hockney, Kathe Kollwitz. German Expressionists like Max Beckmann and George Grosz. Cuban, Russian, and Chinese poster art. I also enjoy the work of self-taught and folk artists. Some of my work deals with personal history, war, and social justice, so artists that have dealt with those kinds of issues in their work have always interested me.

Major political figures have inhabited your work over the years. When, where, and why did you embrace this population as a focus for your thoughts and your art?

I was always interested in politics and history as a child. Some of my favorite classes were American and European history. Having been born and raised in Cuba, my family’s life was affected by historical events such as the Revolution, the Cuban Missile Crisis and the Mariel Boatlift, which is how I left the country. We had to leave a lot of family behind when we emigrated to the United States so I think I became interested in politics and history as a way to understand what happened to my family.

In high school I entered a cover artwork scholarship competition sponsored by TIME magazine and won first place.  In addition to the scholarship award, TIME gave me a free subscription to the magazine. It was my first magazine subscription so I took in all the cover designs and articles, many of them featuring political figures. When I left college, I got a job as an art director at TIME magazine and my interest in current events and politics continued from there. My early portfolios included a number of portraits of political figures and I then began to get portrait assignments from a variety of publications, so the work just developed from there.

Has social media been a boon for self-promotion? Or do you have methods you’ve always used that still work?

I’ve always been bad at keeping a regular mailing list to let people know what I’m doing. With social media I can just put something up and people that are interested in my work can see the latest. The costs and waste of traditional self-promotion always bothered me.  As an art director, I regularly received a large amount of highly produced promotions from photographers and illustrators. Much of it ended up in the garbage because it was not relevant to the kind of work we hired. With the internet, people go out of their way to find you so you know that they are more likely to be interested in your contributions.

I started a blog around 2005 and used it as a platform to educate the general public and art directors about the process that goes into art and illustration. I’ve received a lot of appreciative feedback over the years. Many people have no idea where the images they see in magazines or advertising were coming from. Through social media, many friends and family have learned a little bit more about illustration.

What are some of your favorite blogs/websites for inspiration?

I don’t visit art websites regularly, I’m more interested in gallery or museum shows, seeing the art in person. I’ve been a part of drawger.com from its inception. This is a collection of artist-run blogs all under one banner. I find a lot of inspiration and camaraderie from the other artists on the site. We’re all in the same field but approach solutions in so many varied ways. One of the places I visit regularly is The New York Times website/app. Since a lot of my work deals in current events, the stories in The Times are always an excellent resource.

Have you ever had a creative block with a deadline looming? What do you do to get crackin’?

I’ve been fortunate in that I usually find ideas fairly easily, they kind of pop into my head.  Still, sometimes I do get stuck, especially if the first thoughts are not working for the client. Over the years I’ve learned that the best thing to do is to just start putting marks down on paper, anything, just put it down. I sometimes end up with many sheets full of nonsense. You can then start seeing a conversation develop between the marks, symbols, or characters, with a solution somewhere  in there. I also keep notebooks where I jot down ideas and compositions, unrelated to particular assignments. If I’m stuck on a solution, I look through my notebooks and try to find an idea that could work. Sometimes I step away from the studio and do something totally unrelated to art and the ideas start flowing.

What was the last art exhibition you saw and what did you take away from it?

The Claes Oldenburg show at MoMA. I especially liked his Mouse Museum and Ray Gun Wing in the Atrium. The Mouse Museum is a selection of small objects he collected, along with rough models for sculptures. Some of the objects, like clothes pins, plastic food and small toys later became monumental sculptures. I liked seeing how his personal obsession of collecting small objects became part of the bigger Pop Art movement. It reminded me that pursuing one’s very personal interests can lead to a certain universal understanding, something I’ve believed for a long time.

What advice would you give to a young illustrator who is just getting noticed?

Keep doing the work you want to do and let the assignments flow from there. Don’t change your work to fit what you think the marketplace wants. Travel, see new places, continue to learn and change as the years go by. Don’t just settle on a certain look because it’s been successful. Remain an artist, always searching and growing.